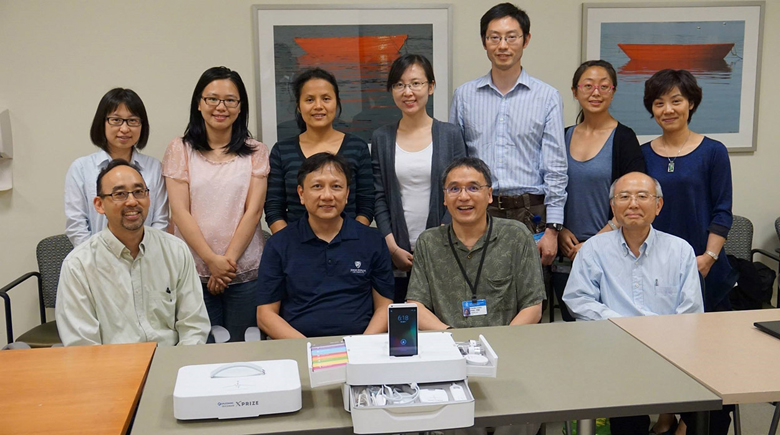 LOS ANGELES (December 13, 2016) - XPRIZE, the global leader in incentivized prize competitions, today announced the launch of consumer testing in the $10M Qualcomm Tricorder XPRIZE, in which two finalist teams’ devices will undergo consumer testing in the final phase of the competition. The global competition, sponsored by the Qualcomm Foundation, challenges teams to develop a consumer-focused, mobile diagnostic device based on the medical Tricorder of Star Trek® fame first shown to TV viewers 50 years ago. The devices are required to weigh less than five pounds, diagnose and interpret a set of 13 health conditions and continuously monitor five vital health metrics.

Consumer testing will continue through early 2017 and will take place at the Altman Clinical Translational Research Institute at the University of California San Diego. The testing is assisted by a clinical coordinator who trains the consumer on the device, followed by an approximately 90-minute independent session that provides a diagnosis within minutes.

The top two teams have advanced to the final consumer testing round:

“It is an impressive achievement for these two teams to advance to the consumer testing stage of the competition with their devices,” said Grant Campany, prize lead, Qualcomm Tricorder XPRIZE. “This stage not only takes us one step closer to transforming sci-fi vision into a real-world impact, but more importantly, we are another important step closer to bringing a very user-friendly device to consumers around the globe, allowing them to proactively manage their own health in a way that has never been done before.”

“Star Trek has inspired many engineers on a quest to improve the world by turning science fiction into reality. The Communicator preceded the smartphone, which has revolutionized our personal interactions, and provided instant access to knowledge and entertainment,” said Dr. Paul E. Jacobs, executive chairman, Qualcomm Incorporated. “Now, our healthcare will be improved through the hard work and ingenuity of the Qualcomm Tricorder XPRIZE teams who are bringing the devices to life. We congratulate these two finalists on their success to date and wish them luck in the consumer testing phase.”

Launched in 2012, the Qualcomm Tricorder XPRIZE will culminate in the first quarter of 2017. The first prize winner is awarded $6M, with $2M for second place and $1M for the team that receives the highest vital signs score in the final round. An additional $1M has been awarded in milestone prizes. The competition was officially extended in December 2015, providing the remaining seven finalist teams with additional time to further refine their submissions and perform lab test sessions and human test sessions before they entered the final consumer testing phase of the competition. Based on these additional tests, only two final teams were selected and permitted to progress to the consumer testing round.

For more information on the Qualcomm Tricorder XPRIZE, visit tricorder.xprize.org.